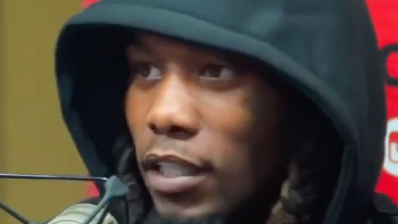 Celebrity rap artiste Offset recently appeared on the Tonight Show Starring Jimmy Fallon. The 30-year-old rapper showed up on the late-night show to perform his newly-released songs while also opening up about his son's musical talent.

Offset On 'The Tonight Show'

Offset took to the stage on The Tonight Show on Tuesday to perform his newly-released tracks Code and 54321. The Georgia-born star also teased a collaboration with his son for his upcoming album. The Open It Up rapper gave a splendid dual-track performance dressed in a red sweater vest, alongside two futuristic dancers in the forefront of a graphic backdrop.

The first hit, which features Moneybagg Yo, was released on August 26, and the second, which Baby Keem produced, hit streaming platforms on August 19. While appearing on the late-night show, Offset also sat down with host Fallon to discuss a few things.

On Featuring Son On New Album

The Bad and Boujee rapper spoke about his role in the upcoming second season of the HBO Max series The Hype, Cardi B and his son Wave Set Cephus’ car-themed first birthday party, as well as his eldest son Jordan Cephus’ talent for making music. “We was in the house, and I went downstairs, and he was on the computer, and I heard, like, a beat being made,” he told Fallon. “So I look, and he making a beat. And I’m just listening, so I record him. And I posted it. And everybody was like, ‘Oh, it’s hard, it’s hard.’”

After revealing that he had “no clue” that his 12-year-old son had started making his own beats, Offset teased a potential collaboration with Jordan on his forthcoming record. The rapper confirmed that he was going to let his son get “nice and seasoned” and then would possibly feature him in the album.

Meanwhile, Offset, and his wife Cardi B threw a luxury car-themed party over the holiday weekend for their son Wave's first birthday. On Monday, September 5, the parents shared highlights from the fun-filled event via Instagram. Per Hypebeast, amongst the eye-catching moments captured on camera is a snap of the birthday boy and his family members, rocking matching custom denim looks.

Per BET, the party venue was decorated with colorful balloons and car-themed decor. Wave rode into the celebration in a custom mini car, and the birthday cake was a beautiful detailed car-themed cake. Sharing the awesome moments, Cardi wrote via Instagram: “WAVE, SET, GOOOO!!!!!! 🏁🏎🥳HAPPY BIRTHDAY to my love. Thank you @pep_ent for making this happen. …Thank you to the DJs, chef, activity group, and of course @joolstv_ my sons absolute favorite!!!!”